With Taylor Heading Out

With the likely hood that the Vikings will be losing their third down back Chester Taylor this upcoming free agency period. Taylor came to the Vikings to be the feature running back, he was that back for one season, then the Vikes drafted Adrian Peterson. The one season was a decent one for the average RB running over 1400 yards. It was a pretty good change up for the Vikes struggling to find a back since Robert Smith. If the Vikes do lose Taylor to FA? Then who can the Vikes find this offseason?

Right now, I like Brian Westbrook for the new Vikes 3rd down back.Westbrook was released by the Eagles earlier this week. Westbrook is the all time leader for the Eagles for total yards from scrimmage. He has over 3700 yards receiving and nearly 6000 yards rushing and 66 TDs in his Eagles career. He would be a great screen back.Another pro on Westbrook is that he does not fumble much either 8 times in his 9 years with 1734 touches.
The issue with Westbrook is his ability to stay healthy. He has been plagued with concussions throughout his career.He knows to find a team that he is going to be a backup and not the feature back in the offense. I think he would be a great replacement if and when Taylor living from more playing time.
Posted by Clint at 9:06 AM 1 comment:

With everyone in the league knowing that AD only downfall is his inability to hang onto the ball. It is usually when AD is trying to get the extra yard or so. So many fans are enraged every time he fumbles the ball away. Peterson has many more positives than negatives. He strikes fear into every defense that he faces. The opposing teams usually stop AD in order to win the game.

There have been some great that have had issues hanging onto the ball earlier in their careers as well:
Great NFL running backs fumbles per season for his first 4 season as a pro:


Eric Dickerson averaged 12.25
Walter Payton averaged 8.75
Jim Brown averaged 5.75
Earl Campbell 7.75
Barry Sanders 6.25
Adrian Peterson first 3 seasons 6.67 average
With so many people thinking that AD needs to fix this problem quick or it many be time to start shopping for a running back. Peterson will keep trying to find ways to try to keep the ball in his hands and not on the ground.It is just surprising with what I hear of his bone crushing hand shakes. Maybe AD is graping the ball to tight and it is popping out. Who knows? We Viking fan will see if AD can fix his fumbling issues.
Posted by Clint at 9:44 AM No comments:

No that Sure right now

With my life getting hectic right now. I am not that sure how long I will be able to keep this blog going the way that I want to.My wife and I are expecting this spring(May 18th).
I have been unable to find the "voice" that I want to have out there. Do not get me wrong I love my Vikings. This sight has never been a go to site for all the Viking fans out there. I think if I have anything to say, I might just post it over @ Daily Norseman(GB Nordic). If i do come back it will be to post stat analysis.

This could be good bye. If it is just check me out over at the best Vikes site on the net: Daily Norseman.
Posted by Clint at 9:24 PM No comments:

With Favre coming off his best statical year EVER in his NFL career. At the end of the season, he CLAIMED that he would not make this into the drama everybody knows that he loves. He made an annoucement on his website,Favre thanks his fans for a "memorable season,"  and goes on to say that, "while the season didn't end in Miami as we had all hoped, I couldn't have enjoyed this season any more than I did."

Of course, he did not say anything about his future in the NFL. Now isn't that a shocker. In my opinion, he was so close to just walk away from this game. Now this makes the start of Favre watch of 2010.
Posted by Clint at 8:42 AM 1 comment:

Do you know what just drives me crazy from the outcome of the Super Bowl this season. It was the fact if the Vikes would have manhandled the Colts in this game. It was not meant to be in this season. I could go on how the Vikes defense was far more superior than the Saints defense.Not one but TWO goal line fumbles kept us(the Vikes) from going and winning the Super Bowl. All what ifs...can not do anything in this case.Now with offseason, the Vikes have to look forward and see who they want to keep and who they want to chop out of their roster.

Now with Favre debating his future to come back as the Vikes QB from season 20.
Posted by Clint at 9:50 AM No comments:

The Saints Are The Champs

Congrats to the Saints and all thier fans on being Super Bowl 44 Champs. Now the Vikes have lost once again to the eventual Champions(12 times). The Saints also have shown that ball control and gambling on plays(onside kick to start 3rd quarter, so do not play the game to safe as the Colts did in this contest.

If you are curious here is the list of teams that have never been to the Big Dance:
Detroit Lions
Cleveland Browns
Jacksonville Jaguars
Houston Texans

SKOL VIKINGS!!
Posted by Clint at 9:02 AM No comments: 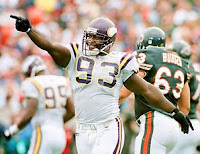 Now this is the second year in a row that the Vikes have sent another 1990's Viking to the Hall of Fame. The Viking joining Randall McDaniel(2009 inductee) in Canton is the loud and out spoken high octane  defensive tackle John Randle.

Randle in his NFL career,amassed 137 1/2 sacks, was named to seven Pro Bowl teams, and was voted first-team All-Pro six times.Randle left the NFL tied with Richard Dent for 5th in number of career sacks, and his 137.5 career sacks is the most by a defensive tackle in NFL history. Damn that is not bad for a player that went undrafted and was always classified as an undersized DT.

He is the reason why I am a Viking fan at all. I loved the way that he went about the game and gave it his all, on EVERY play and I played the same position as Randall did.

The 2010 Hall of Fame class to join Randle are as follows: Jerry Rice, Emmitt Smith, Russ Grimm, Ricky Jackson, Floyd Little and Dick LeBeau. Do you know what is also pretty sweet, no Packer players..:D

With the great news come bad new, Cris Carter gets the shaft once again this season. I am still wondering what does a guy have to do to make it among the great. Carter was one of the great ones when he played the game.I just hope next season will be his time.At least a Viking made it to the Hall this season.

Between Edwards and Taylor

With the NFL heading into free agency coming up in less that a month. The Minnesota Vikings will have some questions to answer on who they will keep and let go to "test" the market. The Vikes need to decide either Ray Edwards or Chester Taylor.  These are the top tier free agents the Vikes will need to play to keep.

Why Would the Vikes Keep Chester Taylor?
Chester Taylor(CT) is a good chance of pace type of a running back.CT was being relied more upon later in the season especially after the fumbling troubles that Peterson was having late in the season.CT is a good screen receiver out of the backfield and a good third down back. He adds a different dimension to the offense when he on the field.
For a running back, he is getting up there in age turning 31 years old this season. With Taylor it is different.  Taylor has been a back up his entire career except the 2006 season. In 2006, CT was the feature back at Minnesota and went over 1200 yards, then after AD was drafted by the Vikes and the rest is history.CT has not endured the pounding that a every down running back goes through on each play from the defense. I think that their is PLENTY of fuel still left in CT's tank, so it is going to be interesting to see what colors that he will be wearing next season.

Why Would the Vikes Keep Ray Edwards?
Ray Edwards has been the ignored man on Vikes front defensive line.What would you expect from a line that has Jared Allen, Kevin and Pat Williams? Each season Ray Edwards has been improving, this season he had 51 tackles and 8.5 sacks. With him not getting the attention that Allen get opens him up and that is why he had a game like he had against Dallas, five tackles (all for loss), 6 QB hits,three sacks and a forced fumble.A quick stat he forced a fumble in each of the playoff games this season.
Edwards is 25 years old and entering his 4th Pro season. With Edwards on the market, the Vikes will have to move quick. There are many teams out there looking for a good game disrupted like Edwards. I highly expect Edwards to draw attention from many teams, so the Vikes will need to more fast.

In my opinion, I feel that Vikes should really think about signing Edwards to a lengthy contract as their left end. With the way his is progressing, with the double teams the other three on the line receives, he could have a monster year next season. This would be a great choice if they have to choose between Edwards and Taylor.
Posted by Clint at 10:08 AM No comments:

What Position Should The Vikings Draft In the 1st Round?

Promote Your Page Too 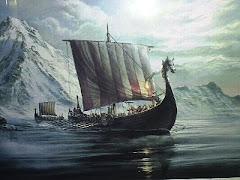